The full segment of aired on Tuesday January 14 on "Strahan, Sara and Keke" on ABC! See the Royal Family and more at Madame Tussauds New York! Online tickets start at just $32!

The Duke and Duchess of Sussex Meghan Markle and Prince Harry made international news last week when they announced they are stepping back as 'senior' royals! As the world's most popular couple right now, everyone is dying to talk to these two... including the hosts of Strahan, Sara and Keke on ABC!

While they weren't able to book the real Prince Harry and Meghan Markle to join them, we helped them out by giving them the next best thing: WAX Meghan and Harry! Joined by Her Majesty The Queen, these three Royals had a blast on set!

To reflect the upcoming change in the Royal line up, Madame Tussauds London will be moving its Harry and Meghan figures from its Royal set and to a new location within the attraction.

Steve Davies, General Manager at Madame Tussauds London, said: “Alongside the rest of the world we are reacting to the surprising news that the Duke and Duchess of Sussex will be stepping back as senior Royals. From today Meghan and Harry’s figures will no longer appear in our Royal Family set. As two of our most popular and well-loved figures they will of course remain an important feature at Madame Tussauds London as we watch to see what the next chapter holds for them.”

Having previously stood alongside The Queen, Prince Philip, the Prince of Wales, the Duchess of Cornwall and the Duke and Duchess of Cambridge, Harry and Meghan will be separated from the family to mirror their ‘progressive new role within the Royal institution’.

Following our sister location, Madame Tussauds New York will be moving these two iconic figures from the Royal Experience into the A-List Room, highlighting them as one of the focal points of the room!

We look forward to spending more time with the couple in North America and we will continue to watch to see what the next chapter holds for them! 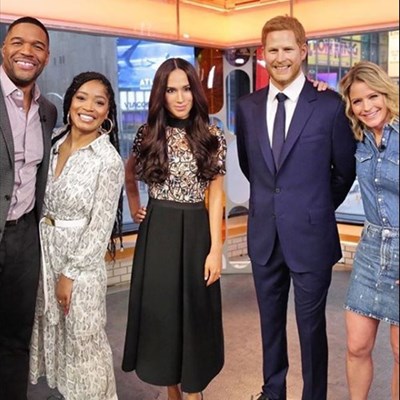