EXCELSIOR! Madame Tussauds New York has partnered with Stan Lee’s POW! Entertainment to pay homage to comic book writer, editor, producer and overall legend Stan Lee with a new wax figure in his hometown of New York City. In true superhero fashion, Stan Lee’s figure will stand alongside the very characters and universe he helped build, greeting guests as they step through a portal and enter the newly refreshed and expanded Marvel Hall of Heroes, an all-new experience allowing guests to immerse themselves in the Marvel universe like never before.

Crafted with meticulous precision, the wax figure features Stan Lee in a classic ‘Spidey’ pose, with a big, warm smile and his famous aviator glasses. The figure will be dressed in the outfit he wore to the “Avengers: Infinity War” premiere on April 23rd, 2018 - including his classic green cardigan, khakis and white sneakers.

“The legacy of Stan Lee continues to live on through his incredible body of work as well as in all of our hearts.  It’s a great joy to see Stan Lee’s wax figure at Madame Tussauds and to give his loyal fans a new way to engage with our dear friend,” said Gill Champion, CEO and President of POW! Entertainment. “I know Stan would get a kick out of seeing himself immortalized in wax standing shoulder to shoulder with many of the heroes he loved so much.”

On November 18, Madame Tussauds New York offered fans a sneak peek of the figure at three iconic locations in New York City, all with personal ties to Stan’s legacy and the characters he created. Stops on the tour included the famed 177A Bleecker Street, Dr. Strange’s Sanctum Sanctorum; Bethesda Terrace, the spot in Central Park where Thor and Loki said goodbye to the Avengers before going back to Asgard; and the newly christened Stan Lee Way, near where Stan grew up in the Bronx. Each stop offered fans the opportunity to see the figure for the first time before it moved to its final location at Madame Tussauds New York in the heart of Times Square.

Beginning November 25th, the Stan Lee figure will stand next to Spider-Man in the newly refurbished and expanded Hall of Heroes, which will also bring the addition of Ant-Man & Wasp, Iron Man and Groot figures for the first time. Guests can meet, greet and fly with some of the most popular superheroes such as the Hulk, the Hulkbuster, Captain America, Thor, Nick Fury and the recently revealed Black Panther figure. 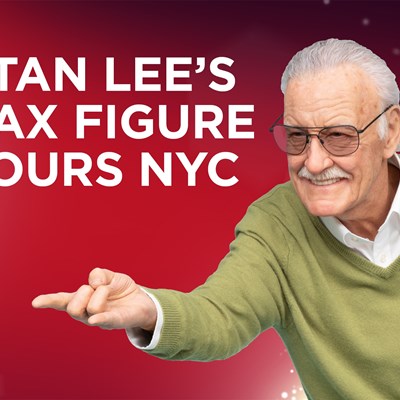