IWD: Why Marie Tussaud was the ultimate girl boss of the 18th century

“Madame Tussauds? The place with all the wax figures?”

Wherever you are in the world, you’ve probably heard of Madame Tussauds…but, have you heard of the fascinating (and slightly grotesque) history behind the huge global attraction?

In honour of International Women’s Day this year, we are paying tribute to our incredible founder, artist and businesswoman – Marie Tussaud. Here’s everything you didn’t know you needed to know about an extraordinary woman who, through amazing feats of strength and perseverance, created a global entertainment empire still recognised today in all corners of the world.

Our story starts way back in December 1761 in Strasbourg France, when Marie Tussaud (born Marie Grosholtz) was born. Marie’s mother relocated them to Bern, Switzerland where she got a job as a housekeeper for local doctor and anatomist Phillipe Curtius. As part of his practise, Phillipe would often practise wax modelling to learn more about anatomy and the body. He quickly took Marie under his wing and began teaching her the wax sculpting technique - she was a natural! Phillipe moved to France, abandoning medicine and anatomy and following his passion for visual arts. Marie and her mother followed him to Paris a year later, with Marie still practising her wax work. She showed a real talent for the art and at the young age of 15, she created her first solo wax figure of Voltaire – a famous writer of the time.

Marie didn’t stop at producing wax figures though, she was also a tutor to the King (Louis XVI)’s sister Élisabeth, sharing her artistic knowledge and skill with royalty. In her memoires, Marie said she was privy to lots of private and important conversations between the King and other subjects. She even claimed she was invited to stay at the Palace of Versailles with the royal siblings on account of her great work too!

Everything was going super well for Marie until the French Revolution in 1789.

This was a period of radical political and societal change which shook France and forever changed the relationship between people and the bourgeoisie. The revolution was one of the bloodiest in modern history.

Because of her association with the royals at the time, Marie was seen by the revolutionists as a royalist and was arrested. Things went so far that she even had her head shaved in preparation for her guillotine execution! She was only released on agreement that she would use her wax talents to make impressions of the revolution’s victims. These were called ‘death masks’ and were made from literal severed heads (yes, really). This was a cruel and taxing task as many of the victims were friends of Marie’s. She was forced to make death masks of Marie Antoinette, Robespierre and even held King Louis XVI’s detached head in her lap - an undeniably hard ask for an incredibly strong woman.

To make matters worse for Marie, her mentor, friend and father-like figure Phillipe Curtius died soon after – leaving his entire exhibition, relics, artefacts and portfolio of property to Marie. 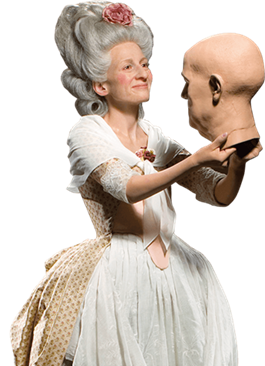 Marie married in 1795 and had 3 children. Sadly however, one of her children died and her marriage broke down. Tussaud’s waxworks business was almost ruined by the ravages of revolution and it was time for her to get a new fresh start, somewhere away from France. In 1802, she took her eldest son and her collection of wax models and ventured to the UK.

Marie carried on showcasing her revolution victims to her new British audience. She continued working and sculpting, using real human hair and whenever possible, human teeth. Sitters meant to appear alive were given glass eyes and those who were dead had their eyes closed. To add to the realism, she even exhibited victims of the revolution covered in fake blood for full effect.

Marie travelled and toured the UK for over three decades with her wax collection. She visited 79 major towns and cities including London, Dublin, Edinburgh, Yarmouth and Norwich just to name a few. Marie had a visionary flair for publicity and worked hard to maintain her presence in the press. She gave out handbills, posters and catalogues showing her work to create more customers and profit.  The pioneer also decided to trade under her own name – a huge move for women at that time, which resulted in her name ‘Marie Tussaud’ being imprinted in the mind of the public.

In 1835, she decided to lay down her roots on London’s Baker Street – her very first established location. Visitors came in droves to walk amongst these replicas of famous faces of the revolution as well as contemporary figures such as royals and politicians. Marie kept her finger on the pulse, making wax figures of the most talked about people of the day very quickly to not miss out on the buzz. (She really was the OG paparazzi!) The waxworks captured the public’s imagination and they were wowed by their natural impressions and the fleshy lifelikeness of the wax. They became the foundation of an empire, blending the famous with the grotesque.

Final days and her legacy

Marie worked at her museum for about 8 years. She wrote her memoirs in 1838 and 4 years later made her final wax self-portrait of herself, which is still on display today.  She worked incredibly hard right up to her death in 1850 aged 89. Many of her original models of Voltaire, Benjamin Franklin and Sir Walter Scott still exist and are preserved today.

Fast forward to 2022 and Tussaud’s legacy is still going strong. Her wax sculpting techniques have been passed down through the centuries and are constantly being explored by the Madame Tussauds Studio Team.  Madame Tussauds attractions can be found in cities all around the world, inspiring the same fascination of seeing celebrities rendered in wax as they did in 19th century England. The attraction has now grown to become one of the most popular tourist attractions in London. It has expanded globally with branches in Amsterdam, Prague, Istanbul, Beijing, Bangkok, Berlin, Blackpool, Sydney, Hong Kong, Wuhan, Las Vegas, San Francisco, Chongqing, Shanghai, Washington, D.C., New York City, Orlando, Nashville, Hollywood, Singapore, Tokyo, Budapest, Vienna, New Delhi and Dubai. That’s a lot!

Marie has also made an impact on popular culture and was featured as a minor character and quest-giver in video game Assassin’s Creed Unity, which takes place in the French Revolution.

Marie Tussaud’s life is an astonishing survivor’s tale. A story of strength, perseverance, talent and will. Despite unthinkable circumstances and surviving a major historic conflict, she allowed her artistic gift, talent and courage to carry her across the world and found a brand worth millions. Tussaud lived during a time when women were scarce in all professional vocations, and their public activities were intensely critiqued. Despite the odds set against her and the years of danger and revolution in France, this incredible woman decided to hone her skills, follow her passions, go into business for herself and strike out alone in a new country with amazing success. She is a trail blazer and an impressive role model for self-reliance, money management and is true inspiration to us all.

We celebrate you today Marie! 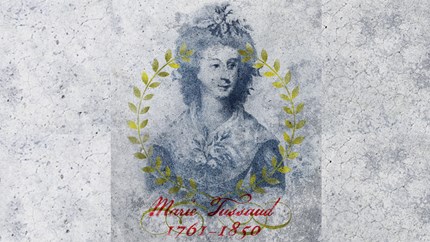