Working in partnership with Bowie’s estate and using information from his 1983 sitting, Madame Tussauds London’s new figure is the second to be created of Bowie and immortalises his alter ego the extra-terrestrial rockstar, Ziggy Stardust. Fans of the icon of sound and vision will recognise the Starman’s signature red hairstyle, cosmic jumpsuit and celestial makeup made famous in the 1970s.

Bowie’s new figure marks the launch of our newly revamped Music Festival zone; the only place where guests can experience a truly impossible line up of musical greats. From posing with Beyoncé and Amy Winehouse, jamming with Jimi Hendrix and Ed Sheeran to owning the stage alongside Freddie Mercury and Stormzy, this is a line up that only Madame Tussauds London could create.

To celebrate the arrival of Bowie’s new figure and the completion of the attraction’s impossible festival line-up, we re-visited some of the capital’s most iconic music venues.

Tim Waters, General Manager at Madame Tussauds London said, “David Bowie as Ziggy Stardust transcends generations and music genres, making him the ultimate headliner to launch our new Music Festival zone.  We were honoured to work with his estate in what would have been his 75th year and play our small part in keeping his inimitable legacy alive for generations to come.

“We know that guests love to meet their music heroes here at the attraction. With our new Music Festival experience, we’ve captured the magic of live music, with legends you literally could not see perform together anywhere else, in a way that only Madame Tussauds London could. There’s also the added bonus of no muddy fields or main-stage clashes to contend with.” 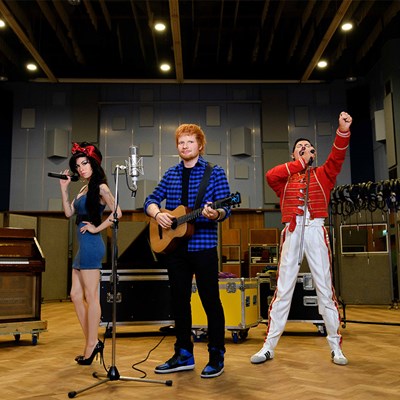